Welcome to episode 22 of the EdTech Situation Room from September 14, 2016, where technology news meets educational analysis. This week Jason Neiffer (@techsavvyteach) and Wesley Fryer (@wfryer) had a special show. Rather than discuss a variety of recent technology news headlines, episode 22 focused exclusively on Dr. Nicholas Kardaras’ August 31, 2016 article for TIME Magazine, “Screens In Schools Are a $60 Billion Hoax.” The article highlights many of the key points in Kardaras’ newly published book, “Glow Kids: How Screen Addiction is Hijacking Our Kids—and How to Break the Trance.” Jason and Wes highlighted several of the valid points from the article regarding screentime, the powerful physiological influence of digital screens, and digital addictions. They also acknowledged misdirected educational technology movements, like the interactive whiteboard craze of the 2000’s and the race for educational technology companies to move standardized student assessments onto digital screens. Jason and Wes took issue, however, with Kardaras’ assertion that students in schools are better served with completely screen-free learning experiences. Referencing Neil Postman, John Seely Brown and other authors, they discussed how part of our obligation as educators it to prepare students to navigate the maze of digital distractions and information flows which characterize our modern age. Wes discussed the transformative benefits which digital technology can bring in differentiating reading experiences for students, and highlighted the example of his wife’s 3rd and 4th grade classroom in Oklahoma City which serves homeless students and families. Shelly Fryer (@sfryer) has taught in a 1:1 iPad classroom for the past 3 years, and uses apps like News-O-Matic to provide developmentally appropriate reading articles for students. Her students also use their technology tools to make and create, showing and sharing their learning and their developing skills. Jason took on the question, “If everything Kardaras’ argues is true, then what for schools?” He pointed out we can’t “un-invent” digital screens, so it’s important to help students become more saavy, intentional, and constructive users of digital screens to support learning and healthy living. Geeks of the week included amazing and affordable headphones from Monoprice (via Jason) and the free coding app for young kids, PBS Scratch Jr (from Wes). Check out past episode shownotes on https://edtechsr.com/links and be sure to follow @edtechSR for updates on Twitter http://twitter.com/edtechsr as well as on Facebook. If you listen to the show, please submit our listener survey using the shortened link http://wfryer.me/edtechsr which forwards to a Google Form. Your feedback and suggestions on the show are appreciated! 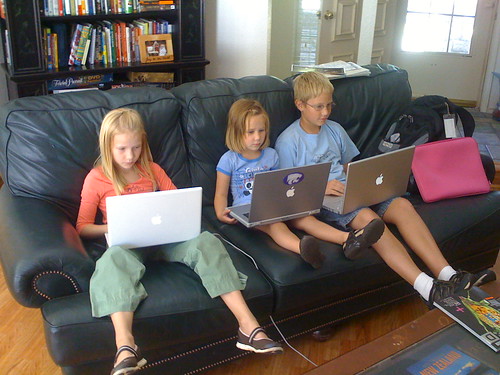