Welcome to episode 21 of the EdTech Situation Room from September 7, 2016, where technology news meets educational analysis. This week Jason Neiffer (@techsavvyteach) and Wesley Fryer (@wfryer) discussed the much-heralded Apple Event from earlier today which featured the announcement of the iPhone 7. Jason and Wes, in classic “Yayyyyy! …. or Mehhhhhhh…” analysis, broke down the major elements of the Apple Event. This included the iPhone 7 camera, the death of the headphone jack, newly announced AirPods, The Apple Watch Series 2, and iWork real-time collaboration. They also discussed missing announcements from the event, which included updates to the MacBook lineup, MacPro updates, iMac updates, or iPad/iPad Mini updates. They briefly discussed the Time Magazine article from August 31st, “Screens In Schools Are a $60 Billion Hoax,” and agreed to dedicate next week’s show entirely to analysis and responses to the varied (and slippery) arguments put forth by Nicholas Kardaras in the piece. Geeks of the week included the the MacRumors Buyer’s Guide (from Jason) and two outstanding videos to watch (from Wes) by Travor Muir and National Geographic. Check out the episode shownotes for links to referenced articles and resources. Also be sure to view our Google Doc with archived links from every show on edtechSR.com/links. Remember to follow us on Twitter @edtechSR and complete our listener/viewer survey, linked first this week in the shownotes! Your feedback counts and we love to hear from our fans around the world! (Note: About 18:45 of the show, we had some bandwidth hiccups in the Google Hangout… and we didn’t edit out that dead space from the show, so please persevere through this minor glitch. Overall given our tech constraints tonight, we’re thrilled with the audio and video quality!) 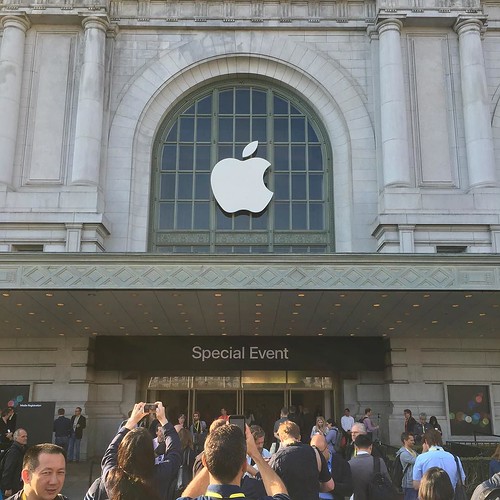 “Apple’s Special Event will start shortly” (CC BY 2.0) by  nobihaya