Our second episode and first experience on Blab.im. We think Blab rocks! Hosts Jason Neiffer (@techsavvyteach) and Wes Fryer (@wfryer) met in “The EdTech Situation Room” on February 3, 2016, and discussed current news and trends in educational technology. In this week’s show we discussed President Obama’s “Computer Science for All” initiative, Apple’s perceived need to innovate more with core iOS apps, an updated rehash on the implications of Apple’s declining iPad sales, a video highlighting the possibility of larger, nineth planet in our solar system, and the future of both Yahoo and Flickr. We also talked briefly about the role of big data in U.S. elections, and shared our Geek of the Week links. Check the podcast shownotes or our shared Google Docs of links on https://edtechsr.com/links/ for more! Please tweet us and share your feedback about and input for the lineup and format of our show. Tune in LIVE to our next show on Wednesday, February 10, 2016, at 10 pm Eastern / 9 pm Central / 8 pm Mountain / 7 pm Pacific. 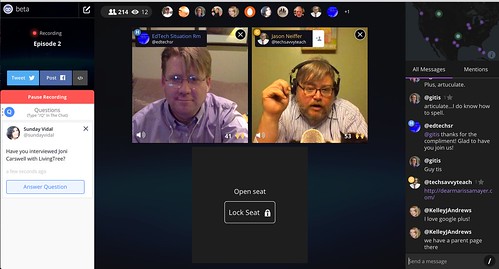