Welcome to episode 104 of the EdTech Situation Room from August 22, 2018, where technology news meets educational analysis. This week Jason Neiffer (@techsavvyteach) and Wesley Fryer (@wfryer) discussed the impact of social media platforms on journalism and the ascendency of China seeking to influence global Internet standards. Rumors of Apple updates to the Mac Mini, a browser extension to identify fake news, the amplified burnout of Elon Musk on Twitter, the “right to disconnect,” and a tense meeting at Google discussing China plans while an employee live-tweeted the event were also highlighted and analyzed. Geeks of the Week included the Amazon Firestick (great for hotel travel), the SurfSafe browser extension, ways you should “Treat your passwords like your underwear,” and a free podcasting course sponsored by the Knight Foundation. Check out edtechSR.com/links for all shownotes, including those listed below. Please follow us on Twitter @edtechSR for updates, and join us LIVE on Wednesday nights if you can at 10 pm Eastern / 9 pm Central / 8 pm Mountain / 7 pm Pacific or 3 am UTC. 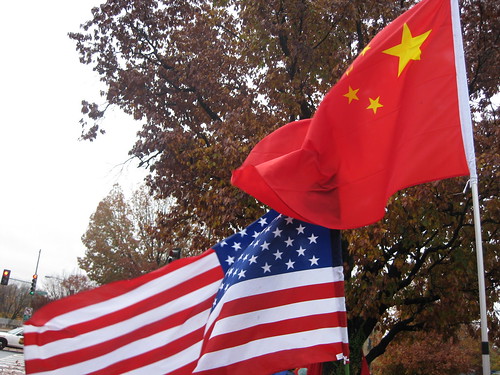 “American and Chinese flags” (CC BY 2.0) by futureatlas.com

Welcome to episode 71 of the EdTech Situation Room from October 25, 2017, where technology news meets educational analysis. This week Jason Neiffer (@techsavvyteach) and Wes Fryer (@wfryer) discussed Microsoft’s play to offer its universe of applications (including the Edge web browser and the Cortana assistant) on Android phones, upgrade woes with iOS 11, and Coda’s efforts to create a new document format merging word processing documents and spreadsheets. Security articles included a shout out to Nicole Perlroth’s September 11th interview on cybersecurity on the World Affairs Council podcast, Facebook security issues and the Facebook privacy checkup, and new attacks including “BadRabbit ransomware” and “The Reaper Botnet.” Jason Snell’s recent article hoping for / predicting a forthcoming Mac Mini update, the incredible learning speed and accomplishments of AlphaGo Zero, SeeSaw’s addition of “Activities” to its classroom app, and new/updated clear solar cells were also discussed. Jason finished out the week’s articles talking about “containers on Chromebooks.” Geeks of the week included discounted Amazon Echos on Woot, the BBEDIT text editor for batch-editing documents, and Storyspheres from Google. Please follow us on Twitter @edtechSR to stay updated, and join us LIVE for a future show at 9 pm Central / 8 pm Mountain. Check all our shownotes on http://edtechSR.com/links