Welcome to episode 272 (“Metaverse Confusion Likely”) of the EdTech Situation Room from October 12, 2022, where technology news meets educational analysis. This week Jason Neiffer (@techsavvyteach) and Wesley Fryer (@wfryer) discussed the 2022 “Hype Cycle” for educational technology in the United States, the merger of ISTE and ASCD, Tim Cook’s view of the metaverse, the new $1500 VR headset from Meta / Facebook, and Microsoft prescience in creating its tablet computer series. Web apps as a leading attack vector for security attacks, election worker cyber-attacks, and another Alex Jones civil trial judgement were also discussed topics. Geeks of the Week included software enabling MacOS updates for older hardware systems, FEMA’s “Build a Kit” website for emergency preparedness, a $22 portable Chinese-manufactured HAM radio, and a power meter tester for USB-C devices. Our show was live streamed and archived simultaneously on YouTube Live as well as our Facebook Live page via StreamYard.com, and compressed to a smaller video version (about 100MB) on AmazonS3 using Handbrake software. Please follow us on Twitter @edtechSR for updates, and join us LIVE on Wednesday nights (normally) if you can at 10 pm Eastern / 9 pm Central / 8 pm Mountain / 7 pm Pacific or 3 am UTC. All shownotes are available on http://edtechSR.com/links. Stay savvy and safe! 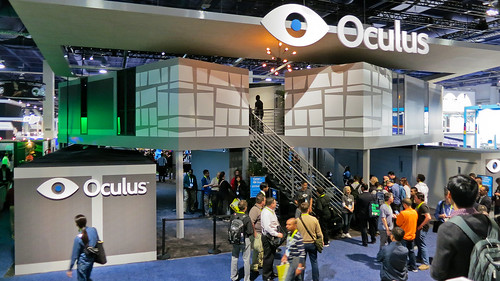 "Oculus" (CC BY 2.0) by Alex Butterfield
Welcome to episode 86 of the EdTech Situation Room from February 21, 2018, where technology news meets educational analysis. This week Jason Neiffer (@techsavvyteach) and Wes Fryer (@wfryer) discussed Apple’s HomePod and the generally negative reviews it hass received in the technology press, Chrome news including PWAs (progressive web apps), and social media’s dark side revealed through the Parkland, Florida, school shooting incident. Additional topics included the need for ethics in artificial intelligence (AI), a recent historical look at AI’s ascendency at Google, and Facebook’s role in the Russia probe / election hack over time. Geeks of the week included Reply, by Google and Textra SMS (from Jason) and Twitter Moments (from Wes). Subscribe to @edtechSR on Twitter for updates.

“Apple HomePod #WWDC17” (CC BY 2.0) by nobihaya
Welcome to episode 77 of the EdTech Situation Room from December 13, 2017, where technology news meets educational analysis. This week Jason Neiffer (@techsavvyteach) and Wes Fryer (@wfryer) discussed Google’s recent announcement to discontinue web store apps, the importance of the open web, and the upcoming net neutrality vote by the FCC. Additional topics included the prevalence of email tracking and whether or not this surveillance is something to be concerned about, the upcoming shutdown of Storify, Google Assistant coming to older Android devices, and a recent PBS Frontline Special (“Putin’s Revenge”) as well as Guardian article about the weaponization of the web by Russia. Geeks of the week included a recent article about going anonymous online with the Tor browser (Jason) and the expensive, hybrid human/digital assistant “Fin” (Wes). Please check out all our shownotes (including articles we did not have time to address in this week’s show) on http://edtechSR.com/links and follow us on Twitter http://twitter.com/edtechSR for updates.

“Save net neutrality, San Francisco” (CC BY 2.0) by credo.action
Welcome to episode 30 of the EdTech Situation Room from November 22, 2016, where technology news meets educational analysis. Visit https://edtechsr.com/links to access all referenced links from our show (as well as some we didn’t have time to discuss.) This week Jason Neiffer (@techsavvyteach) and Wesley Fryer (@wfryer) discussed the challenges of “fake news” continuing to be shared in the aftermath of the U.S. election, and the responsibilities we have to vet and verify articles before passing them on to others. The future of net neutrality in the Trump administration, the rumored end to development of Apple’s AirPort routers, and the impact of both robotics and artificial intelligence on global labor markets were also addressed. As always, Jason and Wes focused on the impact and relevance of these stories for teachers. Please follow @edtechSR for updates on Twitter http://twitter.com/edtechsr as well as on Facebook. If you listen to the show, please submit our listener survey using the shortened link http://wfryer.me/edtechsr which forwards to a Google Form. You can also reach out to Jason and Wes on Twitter to share feedback, questions, or just let them know you’re tuning into the show! If you’re in the United States on holiday this week, have a restful and joy-filled Thanksgiving break!